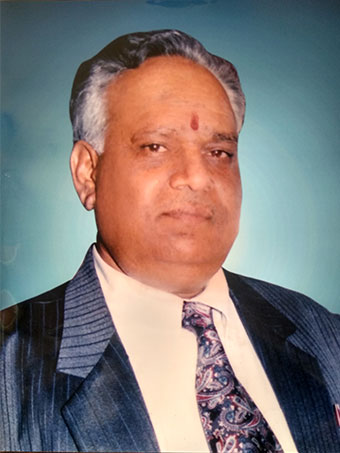 Sarju was a keen learner, inquisitive to ask daunting (at times even daft) questions from his teachers at school and college, Banaras Hindu University (BHU) Varanasi. Pure sciences, and physics in particular fascinated him quite early from his high school days and he eventually graduated in Science with Honors Degree in Physics. Rather than joining his father’s business who was then a class-A railway civil contractor, he decided to pursue upcoming new discipline of engineering – material science and metallurgy, that delves deeper into more abstruse applied physics. While he disguised his family telling them he was enrolled on adegree course in civil engineering (a vogue engineering branch in the 60’s when India was building after its independence), he joined metallurgical engineering stream at Regional Engineering College (REC) Rourkela (now National Institute of Technology NIT, Rourkela, Orissa, India).

After graduating in 1969, among second batch of metallurgical engineers he had a short appointment at Dalmia Industries but soon accepted to join National Engineering Industries (NEI) Jaipur, Rajasthan, as a graduate trainee metallurgist at the plant that pioneered manufacturing bearings in India, in collaboration with NTN Japan. He played instrumental role in developing and manufacturing high performance bearings for India’s first high-speed train, Rajdhani Express (Delhi to Mumbai), and subsequently headed metallurgist positions at India’s reputed steel plants and high & super alloy forging unit. He turned into an entrepreneur and founded his own stainless steel and high alloy foundry, ACMECAST in 1979 at New Delhi which continues to serve the industry since its inception.

India faced acute devastating draught in 1977. He teamed up with UNICEF India and Government of India enterprise, Richardson & Cruddas (1972) Limited to design, develop and manufacture deep well handpump that could be used by village communities to abstract under-ground drinking water. He pioneered development and manufacturing of corrosion resistant stainless steel SS304 and SS316 cylinder units, and stainless-steel underground pump riser main and connecting rod systems. Eventually all the four models of pumps became BIS India Mark standard specifications. Between 1984-1990, more than 5 million such pumps were installed in India and exported to over 60 countries across the globe, to help community access clean, and safe drinking water. His last contribution was replacement parts of Swedish make Bofors Gun made within a week and supplied to the Indian Army during the fierce Kargil war at India-Pakistan Border June 1999.

Sarju was a lively person, generous, compassionate and always had listeners who appreciated his words. Brusque and candid by nature, he never hesitated to speak his mind. Unfortunately, he suffered repeated heart attacks and multiple strokes over the years. Since 2000 his health started declining rapidly in spite of his ongoing treatment at Los Angeles Center for Neuro Sciences, California, USA. His health declined continuously. He gradually lost cognition, suffered paralysis, impaired speech, and restricted motor functions attributed to symptoms of a rare form of Ischemic dementia (neuro disorder disease) known as Binswanger Disease with less than 1000 alive patients around the world today. He decided to return to India for good in 2009. After 18 year of long suffering he had a sudden catastrophic heart failure at 4 pm on Saturday 21 July 2018 that let him meet his creator. In New Delhi he lived with his wife Rekha, two sons – Vishal Kumar (elder) New Delhi, India and Amit Kumar (younger) in Irvine, California, USA; daughter-in-law, Manisha Kumar and Dr Neena Kumar and three brilliant grand daughters-Amisha, Ashmita and Bhavya.

Message from the Founder

We use cookies on our website to give you the most relevant experience by remembering your preferences and repeat visits. By clicking “Accept All”, you consent to the use of ALL the cookies. However, you may visit "Cookie Settings" to provide a controlled consent.
Cookie SettingsAccept All
Manage consent

This website uses cookies to improve your experience while you navigate through the website. Out of these cookies, the cookies that are categorized as necessary are stored on your browser as they are essential for the working of basic functionalities of the website. We also use third-party cookies that help us analyze and understand how you use this website. These cookies will be stored in your browser only with your consent. You also have the option to opt-out of these cookies. But opting out of some of these cookies may have an effect on your browsing experience.
Necessary Always Enabled
Necessary cookies are absolutely essential for the website to function properly. This category only includes cookies that ensures basic functionalities and security features of the website. These cookies do not store any personal information.
Non-necessary
Any cookies that may not be particularly necessary for the website to function and is used specifically to collect user personal data via analytics, ads, other embedded contents are termed as non-necessary cookies. It is mandatory to procure user consent prior to running these cookies on your website.
SAVE & ACCEPT